After a hiatus of several years, it was time again to get back to Berridale and go for a ride. This time it would be different. This time we would be accompanied by members of eXsight Tandems Illawarra. eXsight is an organization that was set up by Mr. Geoffrey Stratton, to encourage people with a disability to come along and try out tandem bicycle riding. The majority of people involved in tandem riding are vision impaired. The captain is on the front of the tandem, and the stoker is on the back.  And that’s the way it should be.

I thought it would be a great idea this year to have eXsight members come along, and be part of riding in the snowy mountain region of New South Wales. 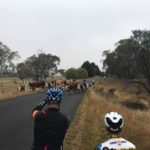 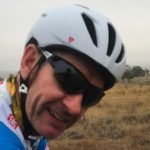 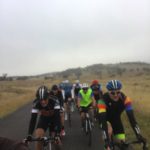 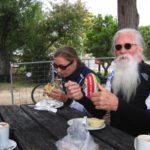 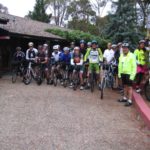 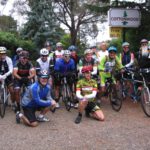 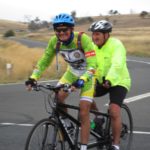 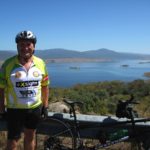 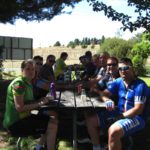 So, he’s the story about our ride in the hills of the snowy mountains;

We headed off from Wollongong on Thursday 23rd and returned home on the afternoon of the 26th February 2017. Our accommodation for the weekend was at Cottonwood Lodge, Berridale. The reason I chose this venue is because it’s my brother’s place.  Also, David Wall was a very accomplished junior rider many years ago, and both him and his wife Lynette know how to look after cyclists.

The first ride was from Cottonwood Lodge out to Dalgety for a coffee. We had about 15 solo riders and 4 tandems out on the trip in really hot temperatures. One of the vision impaired riders stated the temperature was over 35 degrees, and the dry hot winds was making it a very tough day to start the weekend. A big thanks goes out to Jason Hogan for helping out as a captain for eXsight on this ride.

We had planned for Friday to be the big day on the bike. The solo riders took off at 7.30am for the long climb to Charlette’s Pass, up pass Perisher Valley. This was going to be a big day out on the bike, with riders covering over 140 kms, and climbing close to 3000 metres in total for the day.  The tandems left a couple of minutes earlier on their quest to reach Jindabyne.

Once again, we had 4 tandems out on the road climbing hills like a tortoise, only to roar down the other side at speeds reaching 80 kph. We made it Jindabyne in time for the mandatory cup of coffee and a slab of cake. Our good friend Tim (long grey beard) & Michelle (2 X Olympian) were very unhappy that the pie shop was closed, and had to make do with apple turnovers and cream.

On our return, some tandems went straight back to Berridale, whilst the others took a side trip through Kalkite. In total, we rode 85 kms in some of most picturesque countryside of the snowy mountain. We cruised back to the lodge around midday, whilst the solo riders stopped off at Jindabyne for lunch, followed by the local hotel, and then back to the lodge.

Saturday was supposed to be an easier ride. The tandems did a 50km loop out near the dam, whilst many of the solo riders ride up to Eucumbene dam. This was another day of climbing, but the return leg back down into Berridale would make it all worthwhile.

On Saturday night during dinner, I gave a brief overview of eXsight tandems, and did a quick fundraising for our charity. eXsight is a registered charity in New South Wales. I was overwhelmed by the generous support shown by members of the Illawarra Cycle Club and by some of my friends who came along for the ride.

Sunday’s ride was the 80km loop from Berridale to Jindabyne to Dalgety, where the solo riders would meet up with the tandems who rode directly to Dalgety.  We all got together for coffee and chatted away as to who was the strongest climber, the fastest descender, and that guy who sat on all the way. That wasn’t me this time, as I was on the tandems.

We made it back to the lodge in time for lunch and a shower, before heading back to the Wollongong.

To Jason Hogan & Rodney Child who helped timeout on the road, and by providing transport for our vision impaired cyclist, well done guys.

But last and not least, a big thank you goes out to David & Lynette Wall of Cottonwood Lodge Berridale. The accommodation was great and the food was excellent.

Next time David, don’t full the pool up with hot water, not a good look.