The Club has been very active over the past few years trying to secure a Criterium Circuit in the Illawarra.

We were very hopeful with the redevelopment of the Tallawarra power station site, in fact two sites had been surveyed and a third one had been included on the overall redevelopment plans that had been submitted to the Government Departments for approval, unfortunately due to the sale of the land to a developer the likelihood of it proceeding  is negligible.

However the Club looked at another prospective site, the velodrome. Unfortunately it was not large enough to build a circuit around so we applied to WCC to have our lease area extended to include the land behind the houses and up to Farmborough Rd. A proposed Criterium circuit was drawn  including the additional land, see the image below. We see this as the best possible location as it is close to town and we already have significant infrastructure on the site. 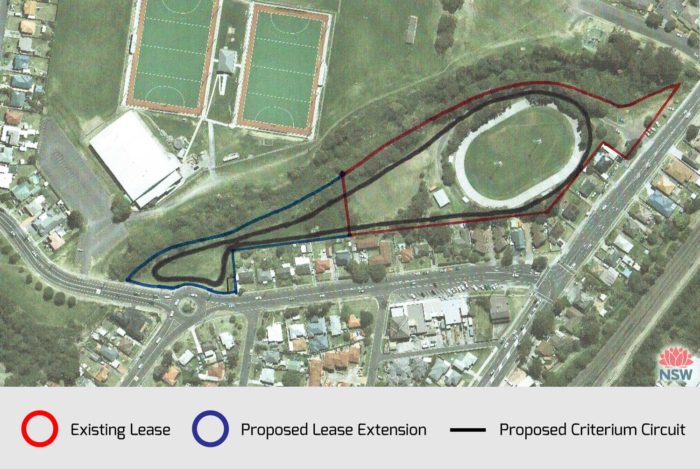 The good news is that after many months of preparing and lodging a submission to WCC, and obtaining approval from the neighbours, the additional land has been added to a new lease area including the velodrome.

Unfortunately this is only the start of the process. Now that we have a lease over the land we have to get it cleared (upcoming working bees!), surveyed and have plans prepared to submit to WCC and Government Departments. The submission will have to include costings and proposed funding that will include the money that the Club has been saving over the years for this exact purpose.

This will be no easy process and will take time, up to 2 years or more and at some point we will require input/assistance from members.

The Club Board will keep the members updated as we reach significant points in the process.