You may not be aware that we have two recently crowned state champions amongst us. Sarah Cliff and Ryan Britten were recently awarded the U15 Female and U17 Male NSW Cyclists of the Year. This award covers their efforts on both the track and road, making the award even more significant. We could not be more proud of these two and wanted to share this amazing achievement.

To learn more about them and their journeys to this point, please read below. 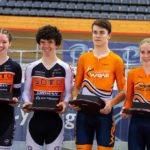 My name is Sarah Cliff. Last weekend I received a prestigious award as female U15 cyclist of the year. I was a second year JW15 representing our club, the period covering the track and road season. I started racing as a first year JW15 on the road.

I am fortunate to be training with the Illawarra Academy of Sport, and Mick Marshall has been my coach since I started actually racing. The academy brings together sports education, physical development and monitoring as well as specific sport coaching.

The award time capsule started with my first track races ever. I didn’t do too many; Wagga, Illawarra, the Sydney NJTS, two Christmas carnival race days and the NSW Junior State championships. Somehow by the end of the season I had developed to the point that I won the individual pursuit and the scratch race at the state event and second in three other events. I wasn’t feeling ready to represent NSW at the National Junior Track championships but ended up exceeding expectations with a 4th in the Keiran, and two 5th places, and an 8th and a 9th.   I had a great time and formed some friendships from both NSW and interstate who I now regularly keep in touch with.

Track season seemed to be over quickly and the road season started before I felt ready. However I’d done a road season as a first year, so I had a bit of an idea on what to expect. The first events were at Bathurst where I won the NSW Hill Climb championships, then an hour later in the main street Criterium, I misjudged a two rider breakaway and had to settle for a 3rd.   The Canberra junior tour was next and there were a lot of riders, and 4 races. I liked the hilly road rides and won a QOM, but placed second at the finish. It was then that a friend told me about the cyclist of the year award and to contest every finish.   For the remainder of the season including our local state junior road championships I tried, and was able to win, all the JW15 events at the tours, and championships collecting maximum points to gain selection into the NSW road team.

What I did enjoy was the junior interclub races put on for us last year. We got to race with the U15 boys and U17 women. These were challenging races, with many more riders and I learnt a lot more.

The road nationals were in Bunbury WA. It was great experience being part of this NSW team. Our state coaches remarked that we were one of the best teams that they had worked with. I was able to place in all three events, 3rd ITT, 2nd Road race, 3rd Criterium, and was awarded the JW15 Champion of Champions overall. The national event was also the conclusion to the National Junior Road Series where I became the overall U15W winner and was presented the jersey in Bunbury.

It was from that combined road and track season that I was awarded U15W cyclist of the year. However none one of it could have been achieved without an amazing coach, training buddies, training and racing events as well as a supportive, generous club (with some great tips), my family, the IAS and so many supportive parents and other parent and coaching helpers at training and race days.

Being awarded the under 15 male cyclists of year was a pleasure to accept. It fits well with my other previous rider of the year awards in under 11 & under 13. I had a great year in the track season winning all 5 gold NSW medals up for grabs. I went onto represent NSW at nationals and won silver in the Keirin and Scratch race, while bronze in the points race. Through the season after 4 rounds at Sydney, Melbourne, Brisbane and Adelaide of the National Junior Track Series (NJTS) I was second place.

The road season was a busy year as we had 4 tours that the road race was a selection event, I came away wining all four. My NSW junior road championships I got bronze in time trial, silver in road race and bronze in the criterium. It was fun to ride the state road championships in the Illawarra and roads that I train weekly on. As a result of this I was selected in the NSW team to compete in the National U15 Championship events in Bunbury WA. This was a great experience I won silver in the road race and bronze in the criterium.

My coach is Mick Kedja and I am in the Illawarra Academy of Sport (IAS). I enjoy training with my coach and the other local cyclists. We are lucky to have other junior cyclists in the area to train with. I have been successful enough to make every state road and track team. This wouldn’t have been possible for my coach Mick Kedja who has pushed me to my limits on my bike to perform the best I could possibly be.

As I get older the training sessions get longer, but I really enjoy the time I spend on the bike in the outdoors. I never get bored of the sensation of riding my bike. This includes the sessions at the track and road rides.

I love doing the ICC club bunch rides on the weekends where you can ride with the more mature cyclists in our club. Hearing their great stories and experience, and about their journey when they were my age. Even though the technology has improved the stories and tactics are still the same. be. The club point score on Wednesday night is fun, I have been doing it for about 3 years but this year I can contest the sprints with the everyone.

Finally, I would like to thank the Illawarra Cycle Club for their support over the years.